Sitting on a stool at the pulpit in the Conference Center during a brief, five-minute talk, President Nelson decried abuse.

“Abuse constitutes the influence of the adversary. It is a grievous sin,” he said. “As president of the church, I affirm the teachings of the Lord Jesus Christ on this issue. Let me be perfectly clear: Any kind of abuse of women, children or anyone is an abomination to the Lord. He grieves and I grieve whenever anyone is harmed. He mourns, and we all mourn, for each person who has fallen victim to abuse of any kind. Those who perpetrate these hideous acts are not only accountable to the laws of man, but will also face the wrath of almighty God.”

In his opening remarks to a worldwide church, Pres. Nelson condemns abuse. "I urge each of us to be alert to anyone who might be in danger of being abused and to act promptly to protect them. The Savior will not tolerate abuse, and as his disciples, neither can we." @KSL5TV pic.twitter.com/9shp6daFic

The morning session also made history.

Sister Tracy Y. Browning became the first Black woman to speak at a general conference. Sister Browning is the second counselor in the Primary general presidency.

A revised edition of the “For Strength of Youth” guidebook also was released with a subtitle, “A Guide to Making Choices.” The updated pocket manual is now less prescriptive and more principle-based, said Elder Dieter F. Uchtdorf of the Quorum of the Twelve Apostles.

President Nelson also described the abuse prevention resources the church publishes on its website. This is the first conference since the Associated Press published a national story about sexual abuse committed by a late, former Latter-day Saint against his own children. The story questioned the church’s response to the crimes.

“For decades now, the church has taken extensive measures to protect — in particular — children from abuse. There are many aids on the church website,” he said. “I invite you to study them. These guidelines are in place to protect the innocent. I urge each of us to be alert to anyone who might be in danger of being abused and to act promptly to protect them. The Savior will not tolerate abuse, and as his disciples, neither can we.”

President Nelson, who has announced 100 temples since being sustained as the church’s 17th president and prophet in 2018, also said the church as a whole rejoices that more temples are being built worldwide.

“With the dedication of each new temple, additional godly power comes into the world to strengthen us and counteracts the intensifying efforts of the adversary,” he said.

New ‘For the Strength of Youth’

Elder Uchtdorf said the updated “For the Strength of Youth” manual is designed to guide youth to turn to Christ.

“To be very clear, the best guide you can possibly have for making choices is Jesus Christ. Jesus Christ is the strength of youth,” he said. “So the purpose of ‘For the Strength of Youth’ is to point you to him. It teaches you eternal truths of his restored gospel — truths about who you are, who he is, and what you can accomplish with his strength. It teaches you how to make righteous choices based on those eternal truths.” 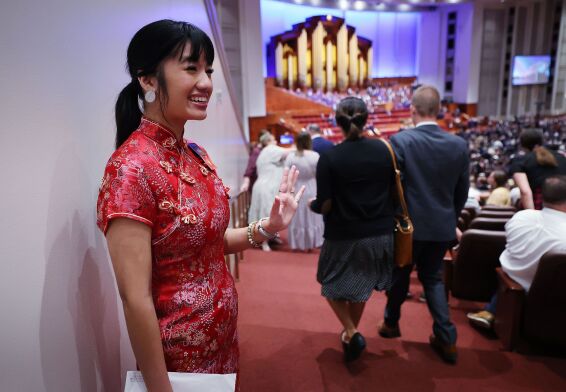 Sister Madison Ramos greets attendees during the Saturday morning session of the 192nd Semiannual General Conference of The Church of Jesus Christ of Latter-day Saints at the Conference Center in Salt Lake City on Oct. 1, 2022. (Jeffrey D. Allen/Deseret News)

The new subtitle is a point of emphasis for church leaders. In May, President Russell M. Nelson gave a landmark talk to a worldwide audience of Latter-day Saint young adults titled “Choices for eternity.” He asked them to choose to prioritize their identities as children of God, children of covenants and disciples of Christ. BYU President Kevin Worthen built a campus devotional around that message last month and it also is being emphasized by BYU’s new Office of Belonging.

Attendance at the session was 10,572 people, according to a church spokesman, because of parking and other concerns related to Temple Square construction. Conference Center capacity is 21,000.

President Oaks spoke about the ways the church and its members help “the poor and distressed.” He note that the church announced for the first time what it had spent on humanitarian giving in a single year.

He said the report is incomplete because it does not include the personal services Latter-day Saints give in their callings or through other charitable organizations. He encouraged them to help other organizations, too.

President Oaks noted that two weeks ago, Latter-day Saint leaders made the largest single humanitarian donation in church history, giving $32 million to the U.N.’s World Food Programme. He also singled out the Red Cross, Red Crescent and Catholic Relief Services as key collaborators who have “taught us much about world-class relief.”

“Other examples of the restored church’s humanitarian and other donations that are also supported voluntarily by our members are our well-known schools, colleges and universities …” and disaster relief.

Elder Dieter F. Uchtdorf of the Quorum of the Twelve Apostles

“We are delighted with reports of large youth conferences being held throughout the world,” he said. “At these conferences, our noble youth are learning that no matter what happens in their lives, their greatest strength comes from the Lord.”

In his talk about the “For Strength of Youth” booklet, which has existed for more than 50 years, Elder Uchtdorf also picked up the theme of making choices.

“For the Strength of Youth” focuses on the foundation for your choices. It focuses on values, principles, and doctrine instead of every specific behavior.

“You can build a joyful, happy life because Jesus Christ is your strength. You can find confidence, peace, safety, happiness and belonging now and eternally, because you will find all of it in Jesus Christ, in his gospel, in his church.”

“I believe the Savior Jesus Christ would want you to see, feel and know that he is your strength. That with his help, there are no limits to what you can accomplish. That your potential is limitless. He would want you to see yourself the way he sees you. And that is very different from the way the world sees you.”

“I always keep a copy in my pocket, and I share it with people who are curious about our standards. It has been updated and refreshed, to better cope with the challenges and temptations of our day. ‘For the Strength of Youth’ will be available in multiple languages this month and will be a significant help for making choices in your life. Please get your own copy, and copies for your friends. It is also available online.”

Sister Browning encouraged listeners to see more of Jesus Christ in their lives.

Elder Dale G. Renlund of the Quorum of the Twelve Apostles

He listed four elements of the framework:

Customs and traditions may vary from country to country, but the “normal” things of life, including scripture study, prayer, church attendance, and family history and temple work should keep members moving forward on the covenant path, said Elder Pino, a General Authority Seventy.

Elder Ronald A. Rasband of the Quorum of the Twelve Apostles

Elder Rasband displayed his copy of a 1970 edition of the Book of Mormon that is precious to him because of they way he studied it as a young missionary.

He said it made him “a Book of Mormon missionary” and a disciple of Jesus Christ.

He described how President Nelson has given copies of the Book of Mormon to hundreds of people, including when President Nelson meets with guests, presidents, kings, heads of state, leaders of business and organizations and of diverse faiths.”

He noted that those gifts recently were made to the First Lady of Gambia.

Elder Rasband said he and his wife have given copies of the Book of Mormon to Mozambique’s president, Filipe Nyuse, to King and Queen Letsie The Third of Lesotho, to India’s Ambassador Pandey to the United Nations in Geneva, and to His Holiness Patriarch Bartholomew of the Eastern Orthodox church.

The Tabernacle Choir performed “In Hymns of Praise,” “Guide us, O Thou Great Jehovah,” “Have I Done Any Good?,” “Rejoice, the Lord is King!,” Brightly Beams Our Father’s Mercy” and “All Creatures of Our God and King.”

There are many benefits that retirement communities contribute to healthy aging. Learn more about how it can enhance your life, or the life of your loved ones.
Close
‘Any kind of abuse … is an abomination,’ President Nelson says at Saturday morning session