The original Gerber Baby is celebrating her 95th birthday (CNN) — Original Gerber Baby Ann Turner Cook, whose famous face has been printed on countless products over generations, is celebrating her 95th birthday.

Cook has been the face of the company since 1928, when her neighbor Dorothy Hope Smith entered a charcoal sketch of the baby into a contest for an advertising campaign, according to the company website.

The artist said she would finish the portrait if she won, but Gerber decided to use it as is.The sketch was so popular that Gerber made the chubby-cheeked tot its official trademark in 1931. 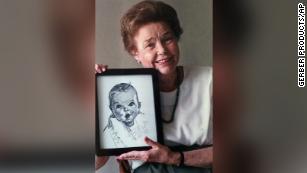 “Since then, the Gerber Baby has appeared on all Gerber packaging and in every Gerber advertisement,” the company said on its website.

Gerber is best known for its baby foods and formulas, but it also sells children’s wear, life insurance and other products.

The Gerber Baby’s identity was kept a secret until 1978 and the company said that over the years people speculated that it might have been a sketch of Humphrey Bogart, Elizabeth Taylor, Sen. Bob Dole and Jane Seymour.

Cook became an English teacher when she grew up and wrote a series of mystery novels after she retired.

Wondering what MBA program is right for you? Take this quiz before you apply to see if it will help you meet your goals.
Close
The original Gerber Baby is celebrating her 95th birthday